President’s Message—2016
Every one of us trains in this wonderful art of aikido with a particular philosophy that is uniquely ours.  Somehow aikido touched us when we decided to begin training.  Whether it was by seeing aikido performed, reading about it, being influenced by a friend, or in my case, seeing in the Founder a truly special individual who ignited that “aha” moment which set my life on a different path.  What is particularly interesting to me is how our thoughts about aikido—our personal interpretations—change over the years as we continue to train.
Why do we train?  This is the physical aspect of aikido.  We have a compendium of techniques which we memorize through practice until the movements become smooth enough to do with minimal effort and without thinking.  O-Sensei said that practice was meant to toughen the body, strengthen the mind, and take out the slack.  Saito Shihan told me once that learning the basic techniques was not really aikido but necessary preparation to understand the higher qualities of aikido.  These remarks clearly address the physical realm of aikido.  This physical training can be demanding and is always difficult for those coming into aikido for the first time.
What comes next?  How will we know?  How will we feel?  How will others see us?  These are some of the questions I have pondered, and after 48 years of practice, and the answers always keep changing with time.    One question which has always been foremost to me is will I be able to do aikido, if I must?  The following admittedly egotistical question is will I prevail?  Most of us who live in non-chaotic societies will probably never have to do koshi-nage to a determined attacker.  On the other hand, aikido friends and students of mine have told me stories about being in situations where the use of actual aikido principles or techniques was necessary and worked out well for them.  I would say in all those cases the most interesting aspect was how quickly the movement or technique applied solved the situation.  The common thread in these anecdotes seems to be the situation never resulted in a prolonged fight.
We can imagine many situations which will demand action on our part but yet are not confrontational.  If a person steps off the curb into the path of a car, will you pull them back?  If a pedestrian trips and falls, will you help?  Actions like these are also a part of our aikido experience and require our action.  An aikido practitioner, in my opinion, practices awareness all the time and is always ready to take action when others are not ready to do so.  This seems to be a rare ability at this time.  Most people will stop and stare.  Aikido people apply their training, act accordingly, and conduct themselves with humility afterward.
Recent events have shown us that the possibility of a serious attack upon civilians is not improbable.  The chances of us being involved, I read the other day, is somewhat akin to being struck by lightning.  That does not mean we should not be prepared to act.  Sometimes just acting will defuse the situation.  The Founder used to say, “Aikido is timing, timing, timing.”  Acting in a timely manner is one of the most important lessons we learn in aikido, and as 2016 begins, is one of the qualities we should strive to develop in ourselves through our continued practice.  This is the quality which will truly distinguish us from others.
Best wishes for the New Year.
Bill Witt
President, Takemusu Aikido Association 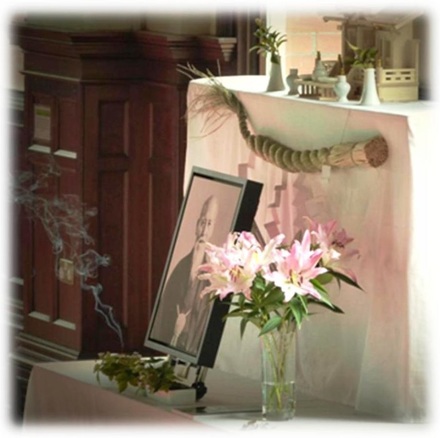 Why do we bow to O-Sensei ?
(Written by Richard Small 4th Dan TIA Europe)
These are my own views, based upon the teachings of others and my own experience. It’s an amalgamation of eastern and western culture but which retains value for self and respect for others.
Bowing is a mark of respect in many cultures so it follows that respect is primary. You might add other feelings too, gratitude or admiration for a start. Perhaps you only bow out of habit, because everyone else in the class does. It becomes just another thing you carry out before warm ups and the proper Aikido you signed up to do. Perhaps you bow mindlessly, thoughtlessly, without feeling. Perhaps your bow is meaningful but travels only one way . . .  ‘what can O-Sensei do for me?’
I am of the opinion that to gain the most from your practice you are best bowing consciously, perhaps with a sense of both giving and of receiving. Strange as it may seem the act of kindness and its effects confer more power upon you than not. So in a way, kindness is unselfishly selfish.
Respect the mat and the dojo, respect your teacher and partner and respect is returned. This is a good lesson for everyday life and in part this too is one of the great benefits of training in the art.
Sometimes students clap their hands during the bowing sequence. It might well be said that you should only clap if there is a kamiza present. (The little wooden house where we might imagine the spirits dwell.)  The clapping is supposedly to request that the spirits join you and help you in your quest. Once again that seems a one way street of, ‘what’s in it for me?’
There may be more than one reason for placing the hands together in ‘prayer’ position. Connecting hands in such a way connects left side of body with right side, making you naturally whole. It connects two major pressure points (nerve centres) in the palms together, one side being Yin and the other yang. It creates a balance of opposites and harmony.
I read recently that the first of two claps is to connect outwardly, to send out your spirit to connect with the universal and that the second clap is inviting the universal to come and join with you. You can try this for yourself, I’d almost make a bet that you will find it very difficult to experience either the out or the in whilst making the clap. It is easier when your mind is quiet and the body not active.
Whatever you chose to do and for whatever your reason you will still find it beneficial to have a purpose of good intent and to engage with it meaningfully.

There is more to Aikido than technique !

Our training area is in a gym at a school.  Each evening before training, everyone helps in laying out the mats for practice.  There is no heat in the gym. The other night as I prepared to start class, it was raining heavily and cold.  In short it was not a good night to be traveling—even short distances.  I was not expecting a big class.  As the time approached and people started to arrive, they immediately began helping with the mats and setting the area up for practice.  When we began there were only four people on the mat.  They all had been training for several years and were not dissuaded from practice by weather or traffic conditions.

I was reminded of a story told to me by Saito Sensei years ago.  When he was a young man he lived on the other side of town and had to walk about 30 minutes to the dojo.  One night it was cold and raining hard.  He went to his friend’s house so they could go to the dojo together.  His friend told him that it was so cold and rainy that O-Sensei wouldn’t be expecting any students that night.  Saito Sensei disagreed with him and said he would be there and they should go.  They walked to the dojo through the rain, using flashlights to light the way.  When they arrived, O-Sensei was waiting in the dojo for them.  Saito Sensei and his friend were the only ones who trained that night.

Saito Sensei told me the story to impress upon me the responsibilities of being an aikido teacher.  However, as I think back it is also a story about the willingness of someone to undergo inconvenience in order to attain something—in this case skill in aikido.

A new year always brings hopes and new challenges.  As the year begins I always feel positive about my life and the future of aikido.  We all want aikido to grow.  We want to share our enthusiasm for the path we have chosen to improve ourselves.  It is important, I feel, not to overreach.  I knew a talented aikidoka who wanted to literally change the world.  He felt everyone should practice aikido.  With five billion people on the planet, such an idea was impractical, but he held to his vision.  I, too, have a vision of what I want to accomplish.  It begins with such small steps as a resolve to be nice to everyone I come into contact with, regardless of personal attitudes.  I have finally come to believe we can do our best work in spreading aikido simply by joyfully sharing our practice with others we come into contact with both on and off the mat.  Outside the dojo we use our best aikido principles in contact with people who come within our maai.  The people who do not train may not know we are practicing our special discipline, but they will respond and will hold you in high regard in future meetings.

We should remember until about 55 years ago, aikido was almost unknown outside of Japan.  When I returned from Japan in 1968 there were only two small dojos operating in the San Francisco Bay Area.  Now, I guess, there are about 40 or so.  I consider that to be excellent growth.  When one goes to the dojo every day and sees enrollment growing only slowly, it is easy to become discouraged.  Now that I have the advantage of hindsight, the number of people who practice, or have practiced, aikido has grown remarkably.

We must consider the idea of going to a dojo, putting on a gi, and getting thrown around does not resonate with most people.  Although we may ask a student to commit for a month at a time, the real goal of training is attained only after many years of diligent practice.  Most people want easier solutions which give the same results and don’t require such long term time commitments.

The physical skills and the “non-technique skills” which we acquire are not available to people who do not enter into the dojo and accept training.  I believe these qualities set us apart from the average population.  Since these skills take continuous effort and are manifested over time, the person who seeks rapid results may get discouraged, and it takes self-discipline to perservere.

Saito Sensei felt that progress in aikido was attained through the hardship of continued study and practice and resulted in a personal joyful feeling and close comradeship to others in the dojo.  I would like to add that our aikido training in a more peaceful and subtle manner really does affect everyone with whom we come into contact and really does make our local world a better place.

I wish everyone peace, prosperity, good health and successful training in the coming New Year.